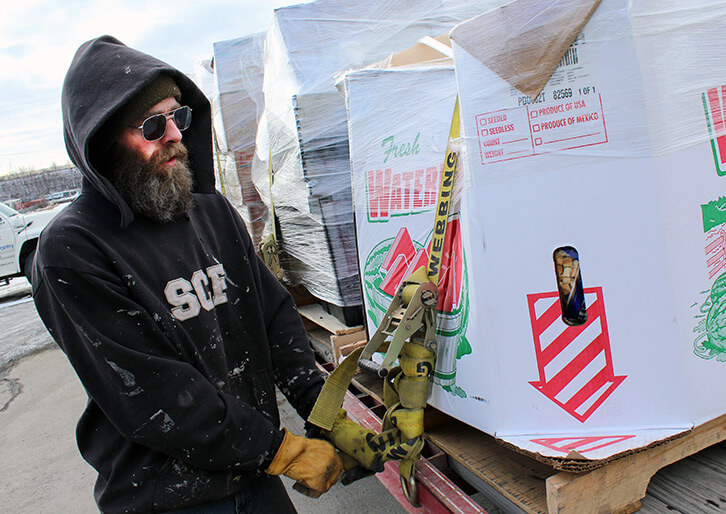 It’s hard to believe that approximately 40 percent of the food produced in the U.S. goes to waste. Of that wasted food, 97 percent will end up in landfills across the country. In the meantime, almost 50 million Americans live in food insecure households.

Glade and his fellow Alaskan farmers, in cooperation with Food Bank of Alaska, are doing something to help reverse that trend by making use of food that is no longer fit for human consumption. They take it to the one place in that allows you to make a pig of yourself – pig farms.

Not only does it help prevent wasting a valuable resource – food, it’s also saving the farmers money. “It’s for a bunch of farms,” explains Glade. “We collect it every Thursday. Instead of always buying grain, this helps take care of the animals and cuts down on our costs”, said Glade.“It saves from wasting food and at the same time helps us out. We’ve been coming here for about a year now.There are about eight farms that benefit from picking up the food here at the Food Bank of Alaska. We get something different each week, sometimes we pick up ten pallets, sometimes we get six, it just depends.So, they get different types of meals as each week is different on what we pick up here.”

The pigs aren’t the only ones enjoying a taste of something other than grain, all farm animals join in on the variety of meals. “It’s not just for the pigs; some of it’s for cows, goats, chickens – pretty much all the farm animals. It feeds anywhere to 80-90 pigs, couple dozen cows and lord only knows how many chickens,” Glade said. “Pretty much helps everybody, as we sell the pigs anywhere from Nikiski to Delta.It’s a lot better than just feeding them grains. It cuts the costs down because we get all of our grain out of Delta. We all contribute to the diesel fuel for the truck. It saves a lot of money for the farmers, plus the food doesn’t end up in the dump and get wasted. It helps everybody out.”

Ultimately, the program at Food Bank of Alaska helps to minimize food waste, while the farmers reduce their feeding costs and add more variety in the food they feed their farm animals. “In the end, everybody benefits and the food doesn’t go to waste,” summarized Glade, “so it’s a win-win.”